Top 10 Reasons to Play Pickleball and Why is it So Popular?

There are psychological and social benefits to playing sports. There are health benefits as well, but most people you ask about the sport will tell you they play it because it’s just a darn good time.

Let’s look at the top 10 reasons people are getting hooked on this game.

How popular is pickleball?

Pickleball is one of the fastest growing sports. According to the United States of America Pickleball Association, as of 2017, there were an estimated 2.8 million players in the U.S., which was a 12.3 percent increase over 2016.

Their statistics show that around 1.5 million reported themselves as “casual” players getting on the court up to seven times per year. Around 930,000 are “core” participants playing eight or more times per year.

To keep up with demand, around 384 new courts are being built every month in the U.S. There’s even a magazine devoted to the sport and you can watch the pros play tournaments on television.

Wondering if it is popular in your state? Jump to: how people are googling pickleball.

Reason #1: pickleball is easy to play

The ease of entry into the sport is truly one of the most enticing aspects of the game. Within 30 minutes, most novices can engage in exciting volleys back and forth over the net. The paddles have a large sweet spot, which makes the ball fairly easy to hit with little practice at all.

New to pickleball? Read our beginner's guide to learn everything you need to know about the game.

The court dimensions are less than half that of a tennis court, which means you don’t have to be precise in your serves or returns to get the ball where it needs to be.

However, after many hours of playing, you’ll be able to fine-tune your hits, which will lead to a more advanced level of skill.

Reason #2: Pickleball is a social sport

While you can hone your shot by practicing against a wall, one of the benefits of the game is that you interact with others.

The most popular way to play is with a partner on your team, which means there will be four people on the court. It’s a great way to get friends together and engage in an activity, often leading to a lot of banter and laughs.

Just because it’s a competitive sport doesn’t mean you have to be cut throat out there – it’s just a great way to socialize, even with strangers. It’s not uncommon for pickleball players to develop strong relationships with people they’ve met on the court.

Reason #3: Pickleball is a fun game and all ages can play

There is no age requirement to whom can play the game. As long as you’re mobile and can swing a paddle, you’re set.

An advantage the game has over tennis is that the court is so much smaller, making it less strenuous for those who aren’t prepared to put in an advanced cardio workout.

Don’t be surprised if you see 15-year-olds on opposite sides of the net with people in their 70s. Obviously, anyone with health issues will want to consult a doctor before taking on any type of exertion. 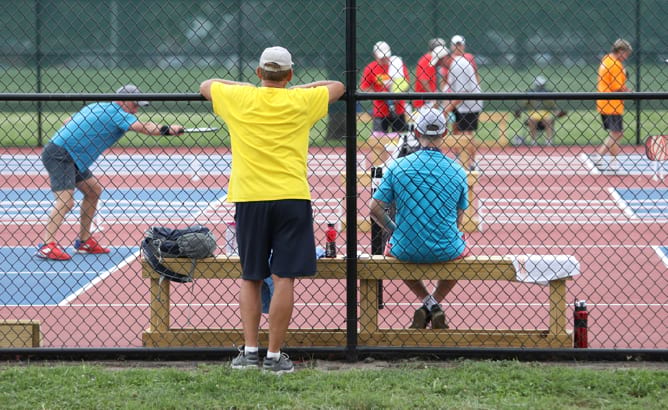 Reason #4: Pickleball is great for everyone at all skill levels

If you’ve ever played table tennis, badminton or tennis, you’re going to be a good fit for the sport of pickleball. Even if you haven’t played any of those games, newcomers to the sport enjoy the game so much because it’s easy to learn.

On any given pickleball court you’ll find a wide range of players at different skill levels – all equally having a blast. The same can’t be said for other sports, such as golf, ice hockey, martial arts or skiing, all of which can be difficult to learn. If you want to really boost your competitive spirit, you can enter tournaments, which will include people competing in different skill levels.

The United States of America Pickleball Association has skill ratings ranging from 1.0 to 5.5. People playing at a skill level between 1.0 and 2.0 are considered those with a minimal understanding of the game. Someone with a 3.0 rating will know all the terms of the game and have the ability to hit forehands, backhands, serves, dinks and have developed a strategy for winning. If you reach a skill rating of 5.5, you’re a top caliber player winning tournaments and consistently playing at a high level.

It’s no joke – pickleball is a healthy sport. A Japanese study found that after studying more than 150 older adults competing in pickleball, they experienced lower levels of depression, which is in part due to the positive aspects of socializing.

But you don’t have to be an older adult to achieve the health benefits of the sport, the physical activity involved in the sport can improve blood pressure and cardiovascular fitness. Because it’s a moderately intense exercise and because it is fun, it’s an ideal form of exercise for middle-aged and older adults.

Reason #6: Pickleball is easy to make time for pickleball

The second you make the decision to play a game of pickleball, all you have to do is grab your paddle and ball and head for the nearest court. There are no elaborate accessories to adorn – no shin guards, helmets, gloves or anything other than your favorite pair of athletic shoes.

Once you’re at the court, you can play as many or few games as you like, unlike other sports where there are four quarters of play or elongated sets, as you’ll find in tennis.

Don’t be surprised if you see 15-year-olds on opposite sides of the net with people in their 70s.

Few sports are as inexpensive to get into than pickleball. For example, for less than $20 you can find a decent pickleball paddle. You can get a six-pack of balls for $8. If you do a little searching on Google you can find sales on bundles that include two paddles and four balls, all for around $20 (shipping not included).

If you and three friends want to get paddles, balls and a net so you can get a game going at your local tennis court, you can all pitch in for about $40 each and get a pickleball set and you’ll be ready to get your doubles matches going.

Because so many courts are public, often built and maintained by the local municipality, you pay no entry fee. However, for-profit clubs will include fees, but you’re paying for more amenities, such as locker rooms, showers and perhaps a concession area.

The dimensions of a pickleball court (20 ft. by 40 ft.) are so small, you can have two games going at the same time on one tennis court. That’s part of what’s driving up the popularity of the sport – more players can enjoy games on surface areas that are much smaller than what is required for a tennis court.

Furthermore, a smaller court means you don’t have to do wind sprints to return a ball. Yes, it’s a cardiovascular activity, but not so much so that it pushes people away.

Reason #9: Pickleball is perfect for parks and recreation departments

Say what you want about the amount of bureaucratic red tape involved with your local municipality, but parks and recreation departments are learning about the benefits of the sport and are creating more courts.

Reason #10: Pickleball is growing fast and filled with opportunity

News articles regarding the game of pickleball are abundant, including one in the Sierra Vista’s Herald Review, which describes a “standing room only” situation at one of its local pickleball courts where people flock to play.

No longer do people refer to pickleball as “up and coming,” because it has definitely arrived and is only growing in popularity. The more the sport grows, the more opportunities for people of all ages will have to enjoy the social aspect of the game, as well as the health benefits that come with it.

So how popular is pickleball really?

It’s definitely growing. To best illustrate the growth we tapped into Google Trends data which shows insights on how many people are “Googling” the phrase “pickleball” over the last 15 years.

The graph shows search volume for the phrase “pickleball” since 2004.

According to Google Trends, Utah and Arizona are the two dominant states when it comes to people's interest in pickleball i.

Based on our last 100k organic visits, the most traffic comes from the highest populated states. This just confirms that pickleball is rapidly spreading nationwide, but the sunniest states of California, Florida, and Texas lead the pack. 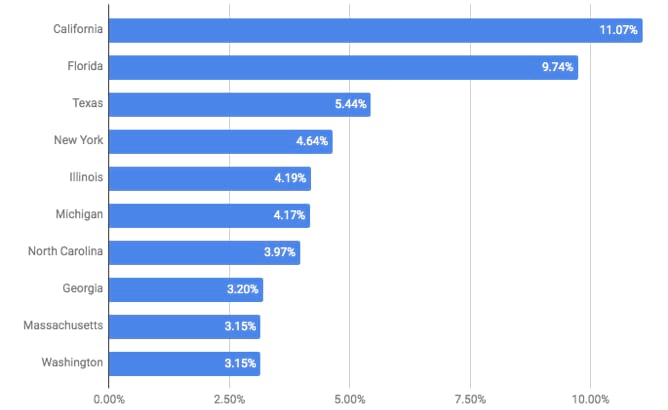 Maybe you’ve heard of pickleball because it’s something your grandparents have latched onto. Maybe you’re thinking it’s just a sport for older adults. While the main concentration of regular players are older adults, it’s fast becoming a sport that even the youngest of people are finding to be an excellent addition to the other sports they play.

Soccer, baseball, basketball, wrestling and football will always be among the most popular, but if you’re looking for something that doesn’t require you to be muscular, have the lungs of a marathoner or the agility of a gymnast, pickleball is for you. Even if you do possess those super powers, you’re going to enjoy the sport. It doesn’t mean you have to give up anything you’re currently doing, just try one game and see how fast you get hooked.